The Truth Behind The Health Benefits of Wine

For years, we’ve been hearing that red wine is good for us. Antioxidants, resveratrol, blah blah blah. Put away the cynicism, son. Turns out recent medical studies have confirmed all sorts of good stuff about wine. And a growing number of vintners are avoiding that dreaded additive, sulfites, and crafting wine organically, which makes drinking it a much more pleasant experience, both while you’re imbibing and afterwards. 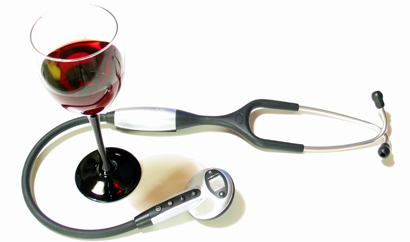 Dr. Cono Badalamenti, 34, owner of Lifestyle Medicine Solutions and PeerWell advisor adds “Enjoying a glass or two of red wine is one of the habits of the Sardinians in Italy, who are some of the longest living people in the world.”

He goes on to explain that the Sardinians make sure that they keep red wine a focal point in their gatherings; it is not just the beautiful women and music that keep their spirits lifted, it is also, well, the spirits.

So here's what the science says.

The team spent 10 weeks gorging mice on a high-fat diet. Once the little Mickeys were nice and porky, half of them were given extracts from Pinot noir grapes; the other half got regular old mouse food. The wined-and-dined mice stored less liver fat and had lower blood sugar.  How come? Certain grapes stunt the growth of fat cells and nearly stop new ones in their tracks. Cool. (Sure, you could get the same effect by eating a few red grapes. But how fun would that be?)

Here are some additional red wine benefits that have recently become more accepted:

More winemakers are now avoiding sulfites (the common term for sulfur dioxide). This is great news for those who suffer from sulfite allergies, although there’s a lot of debate about the chemical’s other harmful effects.

Sulfur dioxide is a preservative that’s widely used in winemaking because it prevents oxidation and other kinds of deterioration. It helps preserve a wine’s freshness. But careful storage can do the same thing. So by all means buy the sulfite-free wine – but treat it like your frail grandma.

Finally, there’s a lot more attention being paid to organic and biodynamic farming, especially among smaller growers and vintners. And technical innovations such as optical scanners and phenolic analysis mean wine is getting cleaner and more wholesomely made than ever. So drink up – just check the label first!

Do It With Friends

“Paired with healthy eating and exercise habits, red wine lives up to its reputation of getting better with time and so do the people who drink it,” says Dr. Badalamenti.

“And while it is worth noting the cell protecting benefits of the phytochemicals like resveratrol play a large role, the way we drink our wine probably matters too. When we look at the oldest living people in the world, we see that friendships and social engagement are integral to their lives. Living a long healthy life isn’t just about nutrition and exercise- it’s about our “style of living” and sharing good times with people goes a long way."

I Like This Grape is a media platform bringing wine culture to millennials by pairing it with fashion, film, food, and music.

The author haven't added any Information to his profile yet